Knowing what type of dog you’re working with – and working with them based on their personality, is the key to helping dogs within the shelter and rescue environments. Often dogs react defensively when handed between households or organizations, even though this isn’t their true personality. Even dogs who erupt in what many call ‘aggressive’ behavior is often a defensive reflex repeated until it’s become second nature.

Have you ever had your life turned upside? Lost your family? Changed your diet? If you did, were you your best self? When life turns upside down many of us react differently than we do in regular life, dogs are no different. By identifying the driving motivation behind your dogs actions, you can use the training method which will give the fastest and most successful results. We’ve developed a quick reference sheet based on Joel Silverman’s What Color is your Dog? book which outlines different dog personalities by color (teachers will recognize much of this). 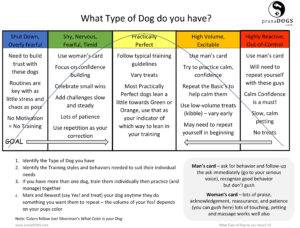 We’ve all seen it – a woman will ask a dog to sit repeatedly, then a man will say sit one time and the dog will immediately oblige. Or a dog will be terrified of a man but trust a woman completely. 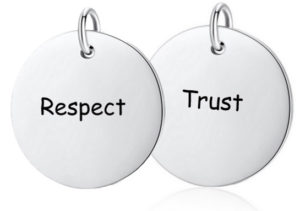 Men and Women are two sides of the same coin: Dogs naturally respect men while they trust women.

Shy, nervous, scared dogs bond much quicker to women. Woman typically speak softer, talk in baby-talk to dogs, give them deep-tissue massages and are often more aware of the animals.

While men tend to be more no-nonsense, they don’t carry-on as much and they can be unpredictable (to the dog) – waking the dog up from a sound sleep, picking the dog up, yelling at the television, etc.

Soft, anxious, and nervous dogs need to gain trust – use the Woman’s card and be sure to use soft reminders and never add pain (I never use pain but if you use pain (like a prong collar) with soft dogs they’ll stay soft and untrusting their entire lives.) It’s your job to show these dogs that the world is safe, lots of encouragement and low-chaos outings with you by their side. Teach them a few basic behaviors then encourage them to excel at these behaviors over and over, in different settings – this will build their confidence and solidify that ‘you have their back’ and they can begin to relax. Lots of treats for these kiddos to show them the world is one of generosity.

Over-the-top dogs need to respect the people they’re around – use the Man’s card with these guys. And take a deep breath before working with them, they’re going to cause you to get frustrated and repeat yourself, accept it and let it go. These guys are often a handful when young or under-exercised but awesome when older or mature. Use your ‘serious’ voice and be firm. Use less treats for these guys – and often lower value ones – kibble or Cherrios instead of hotdogs and chicken. Instead reinforce behaviors with tactile touching/praising or tug/ball play.